Holidays celebrated at Sha’ar Zahav are both the ones we may have learned about as children and those unfolding for us in our evolving world, such as LGBTQ Pride. We often create our own prayers and rituals reflecting how Judaism inspires us in our modern lives. For example, CSZ hosts an annual Transgender Remembrance Shabbat, comprised of readings from Siddur Sha’ar Zahav. 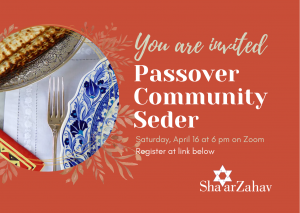 Saturday, April 16 on Zoom: Set your table for the holiday and let’s get ready to rejoice together in our liberation! Our virtual community seder will take place on the second night, and it is open to members and non-members alike. Register here.

Passover Picnic in the Park

April 17, 3:00- 5:00 pm, Dolores Park (Dolores St between 18 and 19th streets)
Celebrate our freedom in the freest spot in San Francisco, Dolores Park! This event is BYOS=Bring Your Own Seder. We won’t be sharing our food with one another, but we will be singing a few of our favorite Passover tunes, thinking about the seder plate rituals and their meaning for us in this particular year, and coming together as a community to celebrate our collective freedom. Grab a blanket, your food, and head to the park!

Springtime is a period of rebirth in the natural world, and in the Jewish calendar. The holidays of Tu BiSh’vat, Purim and Pesach all share motifs of redemption and rebirth. CSZ has long recognized that recovery from alcoholism and similar diseases is also a form of personal rebirth and redemption, and in recent years the congregation has developed an annual Shabbat service around this theme. Recovery Shabbat is celebrated in April, tying it both to Pesach‘s redemption theme and also to National Alcohol Awareness Month in the United States.

On Yom HaShoah (Holocaust Commemoration Day, the 27th of Nisan), we remember the millions of Jewish and LGBTQ people and their allies who died at the hands of the Nazis. The Yizkor prayer includes memorials for Jewish martyrs and for those who perished in the Holocaust. Other appropriate readings include the “Blessing for Social Action,” Communal Prayer of Remembrance” and the memorial blessing for heroes and community activist.

Yom HaAtzma’ut is Israel Independence Day, the fifth day of Iyar. In 1948, this was the day on which the State of Israel was born, following Britain’s withdrawal from the region and the UN’s recognition of the new country. Readings for this day may reflect the significance of Eretz Yisrael, the beauty and natural features of the land, or the political issues that continue to affect the region. Several appropriate selections are found in Siddur Sha’ar Zahav, such as Psalms of Hallel and songs in the Shirim section.

The Shabbat preceding the last Sunday in June commemorates the anniversary of the Stonewall Riots in New York City on June 27, 1969, when gay men, lesbians, bisexuals, transgender people and other queer people rose up in an expression of bravery, freedom and pride. Today, decades later and with considerable progress made in securing equal rights for all citizens regardless of sexual orientation or gender, LGBTQIQ community honors diversity of all forms with Pride celebrations. Appropriate readings are sprinkled throughout our siddur.

On Transgender Day of Remembrance, we hold a service in memory of all those who were killed because of anti-transgender hatred or prejudice. It has been observed at Sha’ar Zahav on the Shabbat preceding the November 20 anniversary of the murder of Rita Hester, a transgender person killed on that date in 1998.

Here’s a look at a few special moments from Hanukkah 2017.

Jeffrey Lilly, Mark Leno and Rob Tat at Hanukkah in the Castro 2016

Alex Ingersoll and Martin Tannenbuam at Hanukkah in the Castro 2016

Learn to Read High Holy Day Prayers in Hebrew One hour evening class (4) sessions Tuesdays, August 30th through September 20, 7-8pm Welcome in Elul with a mini course of Hebrew and get prepared for High Holy Days! Have you sat in High Holy Day services wishing you had a bit more comfort with the…

An Update on In-Person Events and Services Dear Sha’ar Zahav Community, We hope that you are healthy and well. We would like to update you on Sha’ar Zahav’s plans regarding meeting in person at 290 Dolores. Our Reopening Task Force met again on Thursday, February 10 and had a spirited conversation about returning to…

Wingsong: for all the friends who died of AIDS